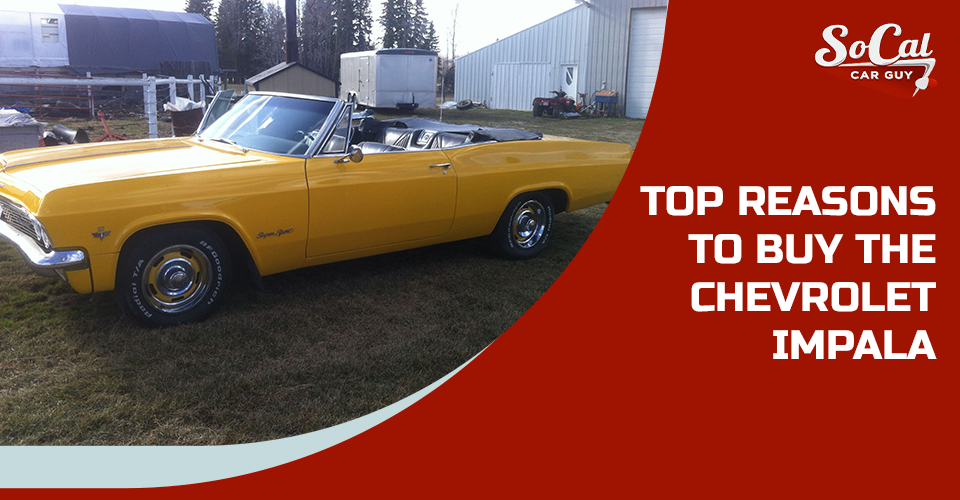 The Chevrolet Impala is a range of car models that evolved into one of the most sought-after classic vehicles on the market. It has great style and great features that make it roomy yet compact. The Impala was distinguished from other chevy models by its symmetrical triple taillights.

The 1964 Chevy Impala came with a classy look that captured the hearts of many. It features an angular and squared-off design with creased body sides, tapered trim strips, extended fender tops, and outward-pointed tail fins. This model is perfect for a fun project and a great choice for gearheads that love to customize vehicles. It has an elegant interior design that is worth the rave. The materials used are a combination of high-quality craftsmanship and a nice touch of luxury.

The full-sized sedan had a top speed of 140MPH, which is impressive for the 1960s.

The 1965 model was one of the best-selling series. 1965 Impala SS ranks at the top of the list of the best muscle cars, and it became a synonym for superior performance vehicle in the 1960s. This 2-door convertible comes with a big block engine 283 V-8 Turbo fire 4-speed, 325-horsepower, 396-cubic-inch engine. 1965 Chevrolet Impala Ss Convertible gave Americans the chance to add some flair to their driveways. It underwent extensive road testing which was used as a guide to picking out the equipment to build.

The third-generation models gave priority to consumer choices. There were options for a 238 cu in V8 engine or a 327 cubic-inch small-block V8. If you want more power you can upgrade to 409 cu in V8 which churns out up to 425 hp.  The Chevrolet impala 1965 ss convertible includes full SS tri-blade wheelhouse moldings, front bucket seats, an all-vinyl interior, brushed aluminum lower-instrument panel with oil-amp-temp gauge cluster and shift trim plate, and SS door emblems. The exterior features include nameplates on the front fenders, emblems on the grille and right-rear side of the deck lid, and wheel covers.

The Chevrolet impala 1965 ss convertible is a stylish ride that can seat six passengers comfortably. It is also easy to restore and can make a fun project for collectors that like to customize. This classic is popular on the collector vehicle market and is great for first-time collectors because it is an easy challenge for even the most inexperienced restorer.

Buying a classic car like the 1965 Chevrolet Impala Ss Convertible is finding a gem among the rubble. It gives you sure top value for your money.